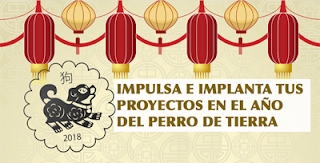 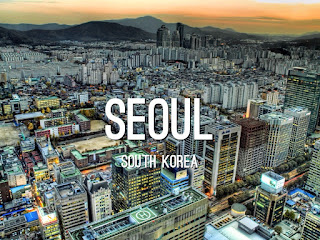 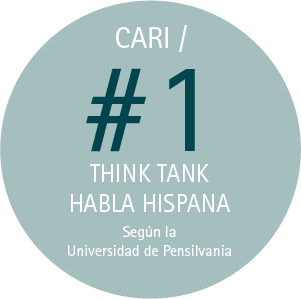 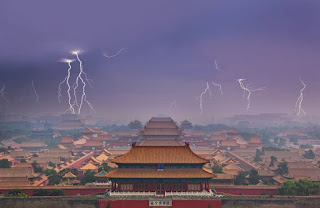 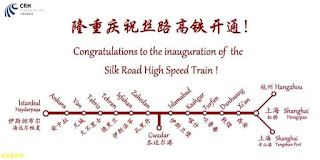 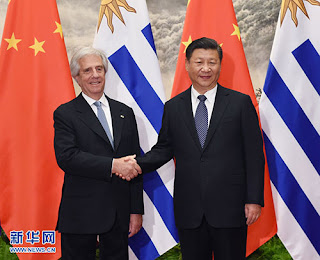 On October 18, 2016, President Xi Jinping held talks at the Great Hall of the People with President Tabare Vazquez of Uruguay. The two heads of state decided to establish China-Uruguay strategic partnership based on mutual respect, equality and mutual benefit, so as to deepen and expand mutually beneficial and friendly cooperation in various fields between the two countries and jointly write a new chapter of bilateral relations.
Xi Jinping pointed out that although China and Uruguay are far apart and have different national conditions, both sides have become good friends and good partners by adhering to equal treatment and carrying out mutually beneficial cooperation since the establishment of diplomatic relations 28 years ago. The current China-Uruguay relations have stood at a new historical starting point. We should make joint efforts to comprehensively plan and execute the blueprint for bilateral cooperation, so as to better benefit the two peoples.
Xi Jinping stressed that China and Uruguay should enhance all-round exchanges, consolidate political mutual trust, maintain close communication at high levels, improve cooperation mechanism, enhance communication in various fields and at all levels including governments, legislative institutions and political parties, as well as continuously increase mutual understanding and trust. Both sides should expand mutually beneficial cooperation and deepen interest integration. China thanks Uruguay for supporting the "Belt and Road" initiative, and hopes that both sides can strengthen the alignment of development strategies and upgrade economic and trade cooperation. Both sides should continue to well implement the five-year plan for bilateral agricultural cooperation, optimize bilateral trade structure, expand service trade and boost the sustained growth of bilateral trade. China is willing to encourage more Chinese enterprises to invest and develop business in Uruguay, participate in Uruguay’s infrastructure construction, and expand mutually beneficial cooperation in such areas as agriculture, clean energy, communication, mining, manufacturing and finance between the two countries. Both countries should intensify people-to-people and cultural exchanges and advance exchanges and cooperation in culture, education, science and technology, the Antarctica, tourism, locality, football and other areas in order to cement China-Uruguay friendship. China and Uruguay should enhance strategic coordination to safeguard common interests. China is ready to strengthen communication and coordination with Uruguay in climate change, global economic governance, the 2030 Agenda for Sustainable Development, peace-keeping, South-South cooperation and other areas.
Xi Jinping pointed out that China firmly supports Latin American countries’ efforts in safeguarding regional stability, unity and development. At present, the relationship between China and Latin America has entered into a new stage of parallel development between bilateral cooperation and overall cooperation. China is willing to work together with Uruguay and other Latin American countries to jointly build a new framework of the “1+3+6 cooperation”, so as to push China-Latin America relations for greater development and forge a community of shared destiny featuring joint progress together.
Tabare Vazquez expressed that people of the two countries enjoy a profound friendship. A sound relationship with China is the national policy of Uruguay. He is glad to see that both countries established a strategic partnership on the basis of mutual respect, equality and mutual benefit, which will open up a new chapter of Uruguay-China relations. Uruguay devotes itself to deepening bilateral mutual trust and supporting the great cause of reunification of China. Both sides enjoy a sound momentum of cooperation in economy, trade, investment, finance, agriculture, fishery, energy, locality, football and other areas. Uruguay welcomes Chinese enterprises to increase investment in the infrastructure construction of the country, and is willing to negotiate a free trade agreement with China. China plays an important and positive role in international affairs, and its development also promotes world economic growth. Uruguay is ready to jointly push for greater development of Latin America-China relations and conduct closer coordination and cooperation in international and regional affairs with China.
After the talks, both sides issued the Joint Statement on Establishing Strategic Partnership between the People's Republic of China and the Oriental Republic of Uruguay.
The two heads of state witnessed the signing of bilateral cooperation documents in such fields as diplomacy, culture, education, industry, agriculture, energy and tourism.
Before the talks, Xi Jinping held a welcoming ceremony for Tabare Vazquez at the square outside the East Gate of the Great Hall of the People. Vice Chairman of the Standing Committee of the National People's Congress Arken Imirbaki, State Councilor Yang Jiechi, Vice Chairman of the National Committee of Chinese People's Political Consultative Conference Chen Xiaoguang and others were present.
Publicado por Mercedes S. Giuffre - Mar del Plata-Argentina en 19:20 No hay comentarios: Enlaces a esta entrada